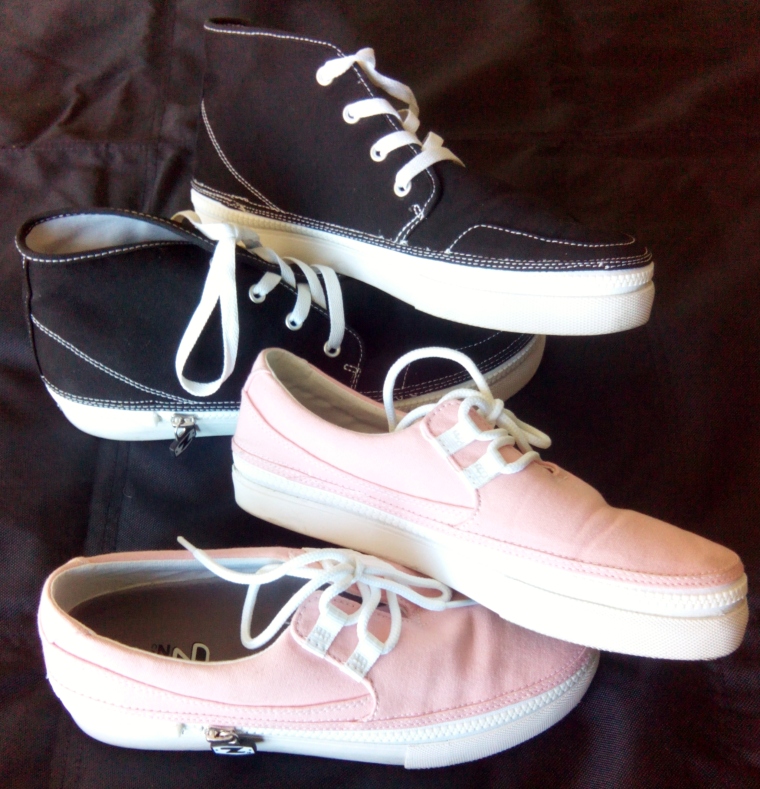 A few days ago, I wrote a preamble about an upcoming special post! Without further ado, here it is!

Love……………..Ah, to quote Frank Sinatra twice in as many weeks, “……is a many-splendored thing“.  I quite agree with ‘ol “blue eyes” Sinatra.  In fact, I am going to step outside the box; in this case, a ‘shoebox’, to be precise.

No doubt from time to time you have experienced moments of the proverbial, “light bulb” adorning your thoughts, at which point you take pause and declare, “Now THAT is something special.”  This presented itself to me last year when I discovered, “Zipz Shoes”.  It would be exceptionally selfish of me not to share my meritorious discovery with you!

The ‘soul’ of Zipz Shoes can be found in California.  John Stefani, Founder and CEO of this phenomenal company had the wherewithal to put his unsurpassed idea into reality:  let the customer build a shoe they would love.  Zipz Shoes sells various “covers” that “zip” onto the sole of the shoe.  One basic pair of shoes can become “transformer-like” by simply unzipping a cover and zipping on another!  The covers can be zipped onto any sole of the same size!

They say necessity is the mother of invention:  Zipz is the invention of my necessity to own these stunning (and extremely comfortable) shoes!

I was instantly in love with Zipz shoes.  There are hi-tops, lo-tops, Zip-ons (slip-ons), and regular lace-up shoes.  What also caught my attention with regard to Zipz Shoes was the notion there are utterly shoes for all ages and styles to accompany one’s personal style.  Speaking of which, Zipz Shoes also offers customized Zipz that allow you to place logos, patterns, and pictures of your choosing onto the covers!

Here is the Zipz Shoes primary website; however, you can find Zipz Shoes at all kinds of locations (google is a wonderful tool):

I thought it would be amusing and informative to show you around Chicago in a “Zipzy” fashion and perspective!  We’ll let our Zipz do the “talking”, and we’ll do the walking!  The black Zipz are called, “Maverick Blackout”, and the pink Zipz are known as, “Hermosa Punk Pink”.  Alright then, let’s Zipz to it! 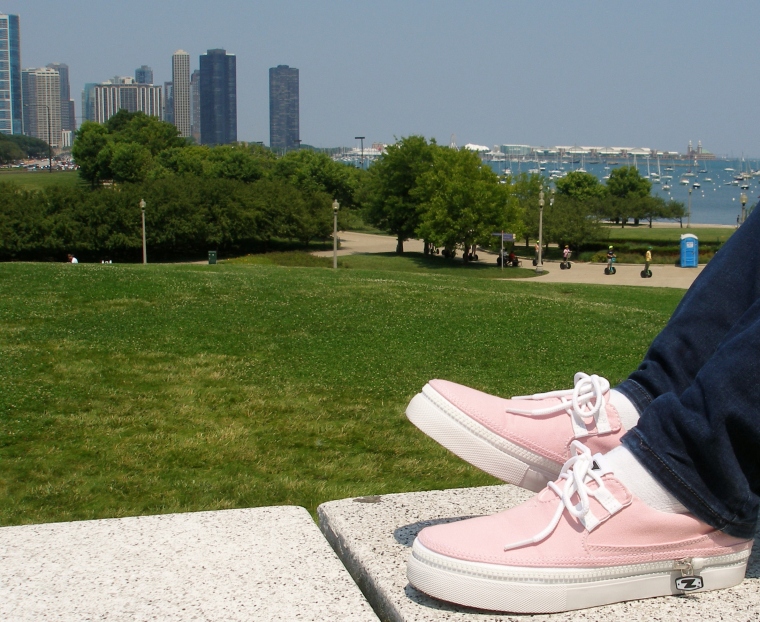 Allow me to introduce myself!  I’m Hermosa, and it is a good thing I have ‘teeth’; it will be much easier for me to chat about Chicago!  Speaking of which, here is a lovely view of some of the high-rise buildings along Lake Shore Drive.  Note the harbor and Navy Pier in the distance.

I adore beautiful Lake Michigan with Chicago’s glorious skyline as its backdrop. 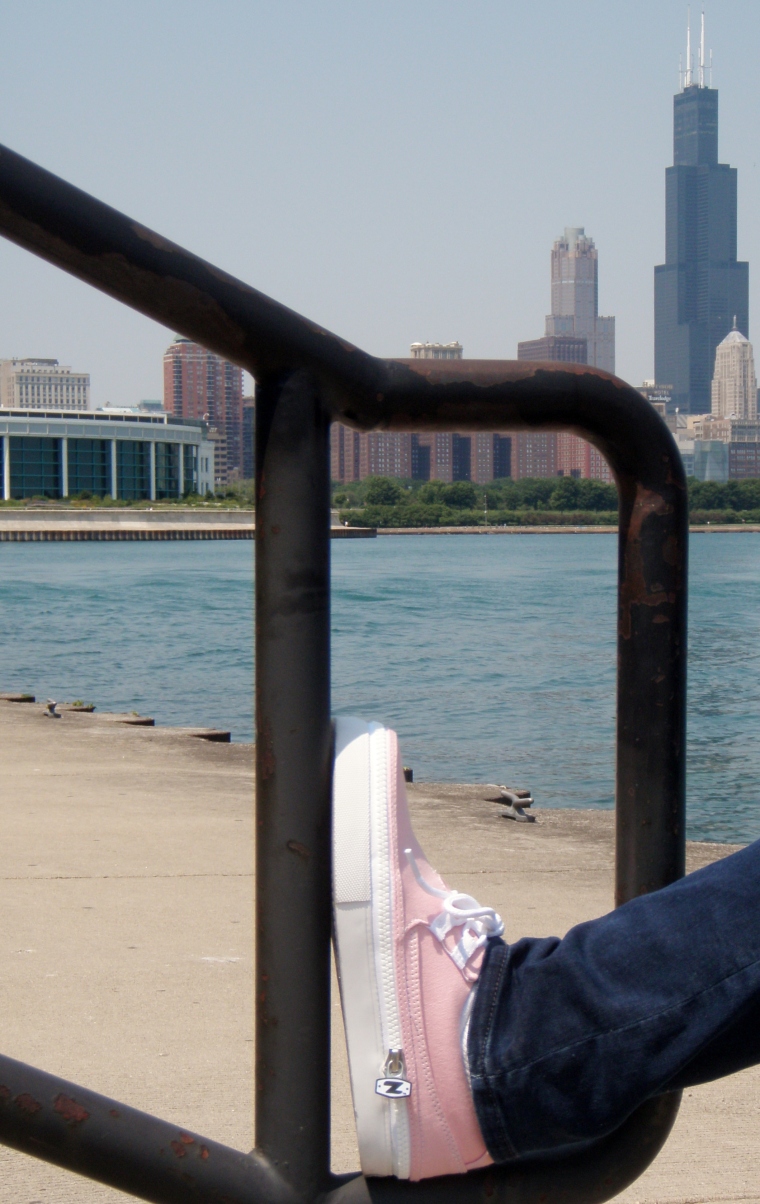 Ah, relaxing in front of Lake Michigan; the sun is shining, not a cloud in sight, and………? What’s that large, dark, “Legoesque” building protruding out of its spot in the skyline district? Why, that is the, “Willis Tower”, formerly known as the, “Sears Tower”.  You say you would like to see it up close?  Certainly, let’s go! Oh, you don’t have your Zipz shoes on at the moment?  We shall do the Zipzing for you!

Hello, Maverick here!  I’m so glad you could join me in the Skydeck of the Willis Tower!  A mere 1,353 feet (or 412 meters) high in a glass balcony is where I find myself at the moment.

I can assure you this is no Photoshop phenomenon!  As a Maverick, I’m a nonconformist who has the appearance of defying gravity!

Hermosa is waiting to capture your attention with something a bit more grounded, so I’ll show you a Zipz-eye view of Lake Michigan, and then we’ll leave the looking-glass lounge for now!

While touring Chicago, perhaps it would strike your fancy to enjoy the sites from a two-wheeled perspective! 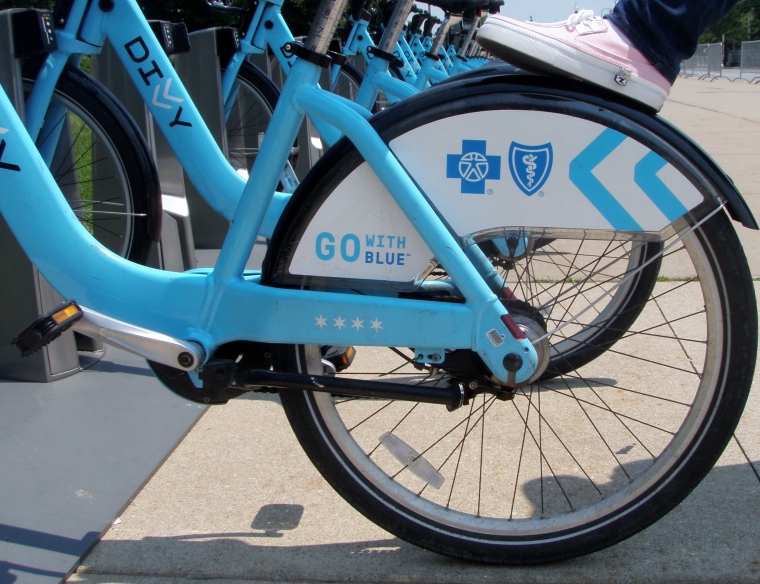 “DIVVY” rental bicycles are a formidable way to scan the city in a convenient, environmentally friendly fashion!  For me, why, I Zipz around in such a way I create my own path!

Oh, I see Maverick is signalling me; Maverick, what on earth!!! 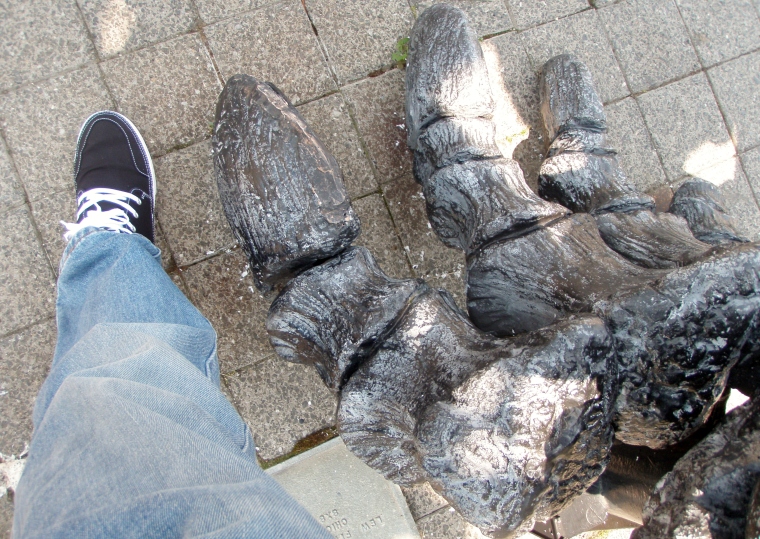 I’m making some very interesting observations over here, folks! Is it just me, or is there a strong correlation between the shape of this dinosaur sculpture’s ‘foot’, and me?  Hhhhmm, perhaps a precursor to the Zipz shoes of today!  I do wonder if the dinosaurs circa 15 million years ago would find themselves still roaming the Plains had they sported Zipz shoes! It would make for a much quicker getaway from their adversaries!

I give this next place most definitely a, “Zipz Up”!

The Field Museum is a natural history museum that is undoubtedly host to a myriad of mammoth wonders of our world!

Speaking of culture (we were, weren’t we?) let’s Zipz over to the Chicago Cultural Center to check on an impressive room seen from a Zipz shoes perspective!

Look, Hermosa, do you see your Zodiac Sign in the stained glass?  I’m pointing at it!

I do, Maverick! Now I just found yours!

Preston Bradley Hall is sure to delight visitors with its Tiffany Stained Glass Dome.  Such a remarkable piece of art!

There is always a considerable amount of reflection happening over at, “The Bean”, located in Millennium Park: 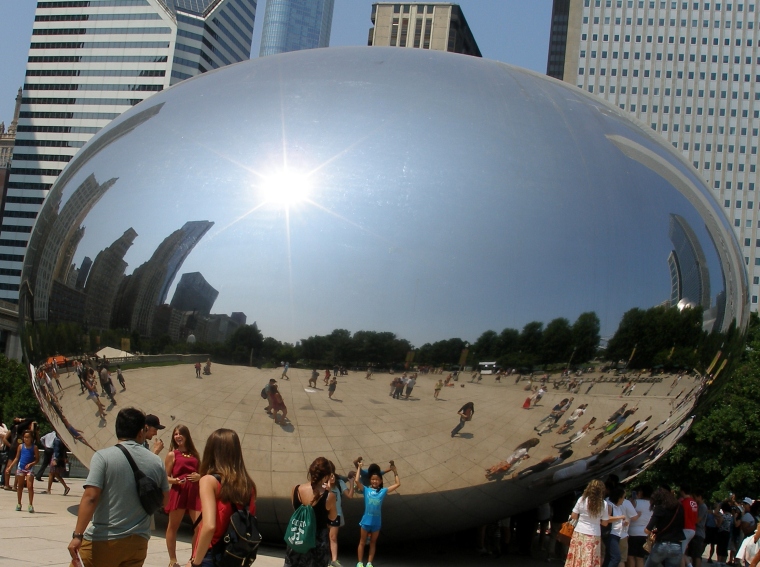 I had to get in on the action:

The more Zipz the merrier, I say!

I think Maverick is ahead of ‘the game’, and seems to have Zipzed over to Wrigley Field!

Wrigley Field; home of the Chicago Cubs Baseball Team.  Say, who’s that over there?

You will have to excuse me.  I feel you were referring to the statue of the legendary Chicago Cubs player Ernie Banks, also known as, “Mr. Cub”.  He spent his entire Major League Baseball career (19 seasons in all as a shortstop and first baseman) with the Chicago Cubs (from 1953 through 1971).  To be quite frank, I was referring to another Zipz friend of ours, “Cali”!  She’s a classic “Lo-top”, but has been known occasionally to change her appearance, if you catch my drift! We’ll let you hang out with the baseball legends, Cali!

Speaking of legends, I wonder if you know what legendary gangster use to call this next stop a favorite hangout in the 1920’s during the Prohibition era:

Al Capone, notably the most famous gangster of all-time, spent many a late night in this establishment.  The tunnels used by Capone and his gang (for reasons we will not go into at this time!) located underneath The Green Mill are still in existence.  The booth where Capone use to sit is invariably standing the test of time.  It remains close to the bar, but no doubt unwilling to give up any of its mobster moments from its torrid past. 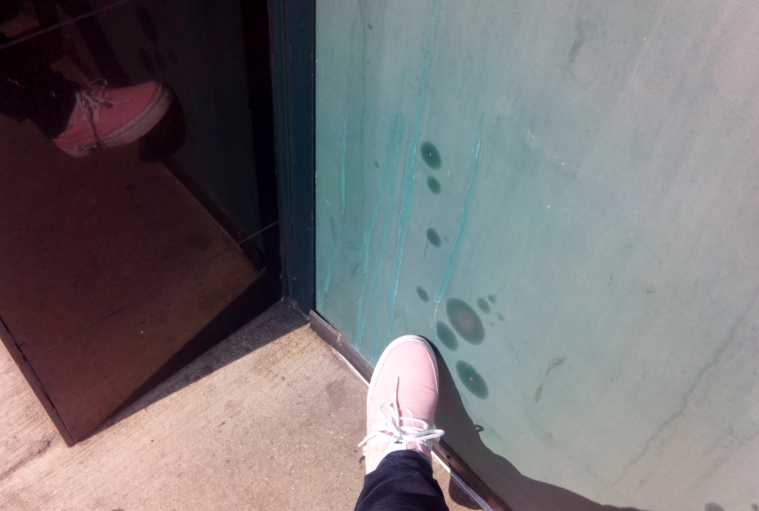 Alas, I knocked at this infamous door; consequently, all I saw was my own reflection attempting to infringe on the lurid past of Capone’s lore.

Chicago…………..A city that’s second to none.  Wait, did I say, “second”?  Why, what on earth would a trip to the, “Second City” be without a Zipz visit to the famous, “The Second City Comedy Club”! 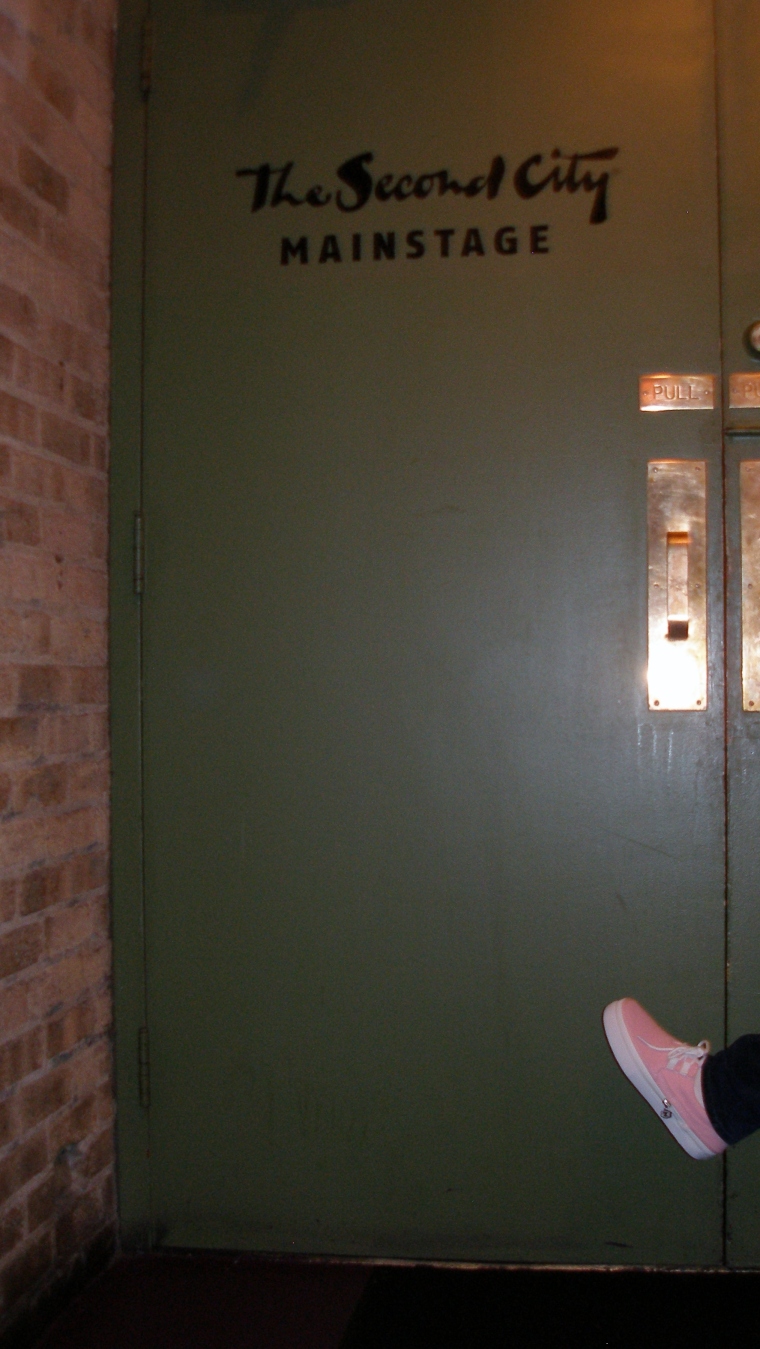 I hear you knocking but you can’t come in (there was a rehearsal happening at the time).  The Second City Comedy Club is an iconic institution unto itself.  Many prodigious, talented comedians have appeared behind this green door.  Joan Rivers, Tina Fey, John Belushi, Gilda Radner, Bill Murray, Dan Akroyd, Eugene Levy, Harold Ramis, Shelley Long, Julia Louis-Dreyfus, Steve Carell, literally just to name some of the remarkable talent to grace the stage in this building.  Truly the energy here is magical.

Whew! What a Zipz whirlwind tour we’ve had! For Maverick, I’m Hermosa thanking you for joining us as we say goodnight from one of the Zipziest towns we’ve ever been to:  Goodnight from CHItown!

50 comments for “Chicago Trips With Zipz!!”