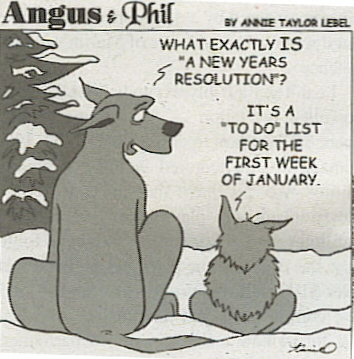 At the beginning of a new year I always, ALWAYS make resolutions that come fast and furious to my mind with only the best of intentions.  Then the second week of January arrives with its bitterly cold temperatures and gray skies.  That’s when the extra bit of dessert seems to arrive on a nearby plate, along with a ‘note to self’ to “definitely” exercise tomorrow.  *sigh*

Resolutions are great kick-starters, but if you are anything like me they are so incredibly difficult to maintain.  I like the fact that we try to press the restart button on our bad behaviors (yes, eating, not exercising, not enough sleep, and the “etc.” goes on and on, doesn’t it?).

However, this year (along with those resolutions of swapping less sweet-eating with more gym sweating), I also included one that I am really hoping will stand the test of Father Time!

I am often in a situation that either makes me really uncomfortable (or, at the very least, annoys the hell out of me) but I don’t do a thing about it.  I ‘put up with’ something and think to myself how rude that person is, or how thoughtless someone is acting.

I started to think about what I could do to improve these ‘interrupters’ on a daily basis.  So here is what I came up with:  we spend too much time lamenting on past events and worry incessantly about the future.  Because we often do this relentlessly, we aren’t living right here right now in the moment.  And in the truest sense, that is precisely where we need to be.  Well, if I can bring my thoughts to right now, I then have to conclude that I might just have choices to change whatever is going on, instead of letting my thoughts wander to things like, “This person is a total jerk”, which then often leads to, “Oh, I remember that guy I used to know 10 years ago who was the same.”

Or, fast-forward to the future (which is another thing we may find ourselves doing), “I have a meeting in two weeks with a business partner and I sure hope they aren’t going to be a goofball too.”

With my realization that I could actually CHOOSE to do something about an annoying situation as opposed to getting upset about it and letting my thoughts wander to past and future, I decided to make it a New Year’s resolution that I would stay in the present as much as possible.  I would look for opportunities to change my thoughts and behaviors when someone was annoying me in any given situation.

And then, as if on cue, the Universe decided to provide me with a perfectly timed, “test”. Here’s what happened the other day.  As usual, I was on the train making my way home.  A woman decided it would be rather nice to not only share her loud music with the rest of the weary commuters, but she would also provide us with a rather boisterous accompaniment with her off-key vocals.

The initial knee-jerk reaction I had was, “You are so incredibly rude; who do you think you are?”  And just before I ‘allowed’ that negative energy to take me into more negative thoughts about the past, I was aware that I could make some choices to, ‘tune her out’.  I searched for my Ipod (I still use one, yes), turned up the volume just ever so slightly, and listened to some lovely, calming music.

Ah, but that’s not the end of that lesson!  Just for a crowd pleasing extra feature, our soloist thought it would be better to stand even closer to me just in case I missed her vulgar vocal chorus.  Guess what I did?  I literally got up and moved seats! And then, as I realized that (I think?) I just completed test #1 of the, “Cher, make choices in the moment” resolution, I began to grin.  And I meant it; the grin, that is.

I can honestly say that at that moment, living in the ‘now’, the, ‘present’ and focusing on changing how I felt for the better, provided me with a huge sense of happiness.  I chose to stay in the moment in a pleasant way, and that felt great.

This is one of the best resolutions I think I’ve ever made thus far.  I have already eaten some extra cookies and the gym doesn’t recall my shadow in 2018 as of yet.  But on that train at that point in time I had a pleasant experience because I made it happen.  Speaks ‘volumes’, don’t you think?

17 comments for “Making Choices Can Change Your Tune”