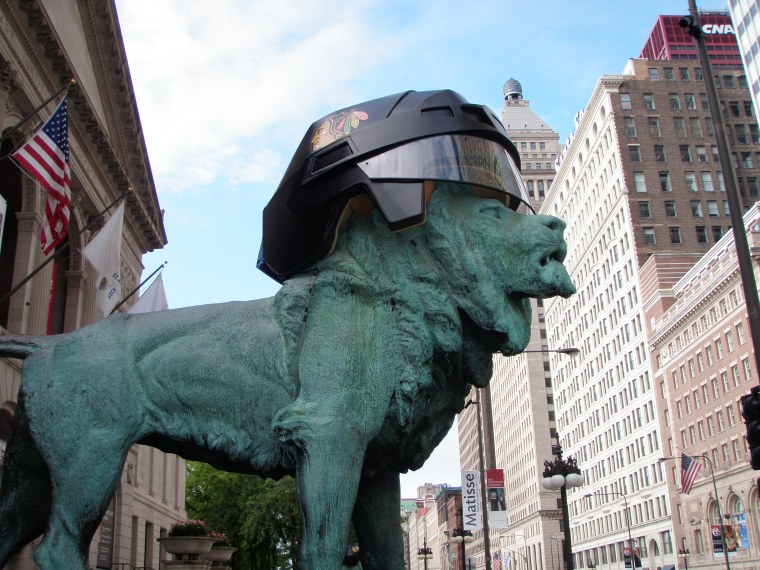 Well now, what do we have here?  Why, it’s a bronze lion sporting a Chicago Blackhawks helmet!

There is a tradition here in Chicago which I utterly love.  Whenever a Chicago sports team makes the final round or game in their particular sport, the prominent bronze lion statues ‘guarding’ the front of the Art Institute of Chicago get a bit of a makeover.  The helmet or hat of the ‘final round team’ is placed upon the head of each lion (there are two).  At this very moment, the lions are sporting “Chicago Blackhawks” helmets!! (The Chicago Blackhawks are Chicago’s National Hockey League team). 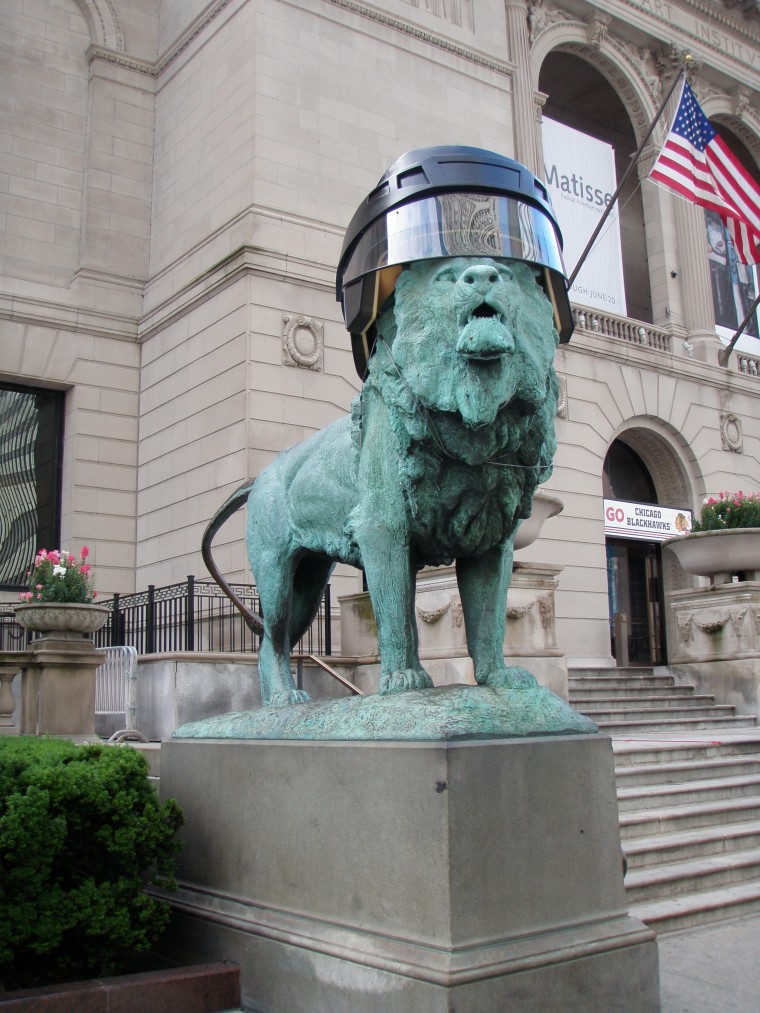 Since 2010, the Chicago Blackhawks have made the final round three times, winning the ultimate hockey prize, the “Stanley Cup” in 2010 and 2013; currently, they are in the 2015 Stanley Cup Series.  Before their monumental win in 2010, the Chicago Blackhawks had not won the Stanley Cup since 1961.  It’s quite a feat to be in the finals three times in the past five years.  I do believe their decades-long drought was sprinkled with some very special hockey hydration!

Canadians love hockey.  It’s in our blood.  I have a little gem to share with you.  My father has been a Chicago Blackhawks fan since the 1950’s.  On April 16, 1961, this dedicated Blackhawks fan listened to ‘his team’ win the Stanley Cup game.  He was sitting outside in his 1955 Buick catching the game on his car radio.  And it was cold outside, but he didn’t care.  The reception on his radio inside the house wasn’t very clear, and there was no way he was missing this historical game.  If this isn’t dedication to the Chicago Blackhawks team, then I don’t know what is!  You might be thinking, gee, isn’t it interesting that my dad has been a Chicago Blackhawks fan all of these years and where does his daughter end up living?  Hhhhmmmmm coincidence? I’d bet on the Stanley Cup that it’s not!

For all of the Chicago Blackhawk fans out there:

← The Friday File……………..I’m Dreaming of a Blue Ocean!
Wordless Wednesday →

29 comments for “Chicago Blackhawks: In the finals, and that’s no lion!”

Live fully and have fun doing so...