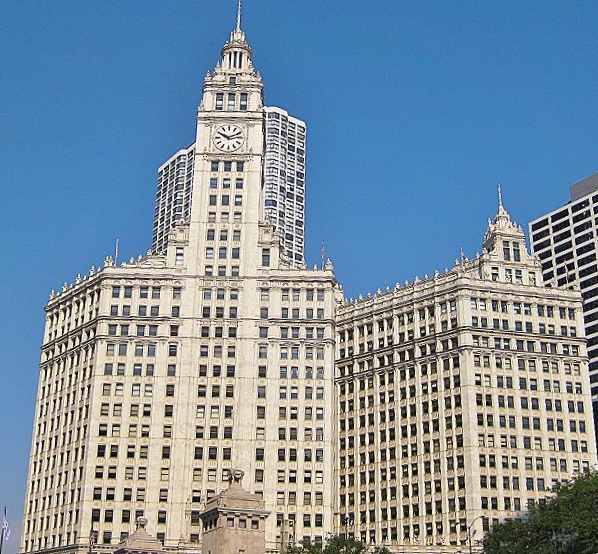 A typical conversation regarding the above noted building goes something like this:

“Quite a fancy building for gum, isn’t it?”

“Yes, it surely is just that.”

The Wrigley Building was built in 1921 for chewing gum king William Wrigley Jr.  Perhaps yet another in a long line of seeming juxtapositions found in Chicago, this grand and stately structure had its architectural influence based upon the “Giralda”, or “Bell Tower” of the Seville Cathedral in Spain.  This idea was joined by French Renaissance particulars.  Now, you might be thinking these two architectural styles compose my juxtaposition reference; actually, no.

I was thinking more along the lines of, “This grandiose structure was once the mammoth office building for a company that manufactures chewing gum.  Ah, chewing gum.  Not necessarily the first thing one might think about when bearing witness to such an impressive building, wouldn’t you say?  Be that as it may, the Wrigley Building is located in downtown Chicago, north of the Chicago River and the Michigan Avenue Bridge.

A ‘cool’ piece of trivia about the Wrigley Building:  it was the first office building in Chicago to obtain air conditioning!

At 30 stories high with a notable clock tower on the 25th floor, it is a beautiful structure that truly sets the stage for Chicago’s plethora of architectural styles and building appearances.

Here is a piece of trivia you might find utterly useless beyond repair, or at the very least, slightly worthy of a small nod of acknowledgement.  Did you know the Wrigley Building is home to the planet’s only chewing gum wrapper museum?  Oh, it gets even better:  it is not open to the public.  *insert cricket noises to connote the proverbial sound of silence void of any human voices.*

Moving right along, the Wrigley Building has set the stage for a number of movies, including the 1957 science fiction film, “Beginning of the End“.  Apparently mammoth grasshoppers ascended one side of the building; looking for gum, perhaps? Other movie appearances by the gum edifice include:  Backdraft, The Breakup, The Fugitive, and Mercury Rising.

The Wrigley Building was sold in 2011 to a group of investors who will no doubt ensure no gum wrappers are haphazardly strewn about the premises.  After all, there is a museum for such a thing, didn’t you know? 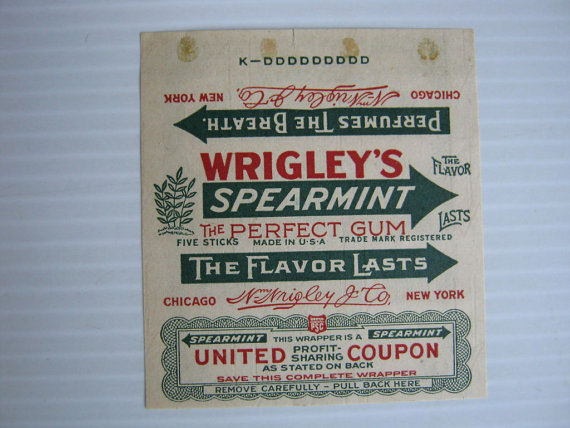 I could not find the year this gum wrapper first appeared; however, I must say there is a lot going on with this label, don’t you think?  Do you see the note, “This Wrapper is a United profit-sharing coupon as stated on back.  Save this complete wrapper.”  My goodness, there must be even more business listed on the back of the wrapper!  Save the wrapper for profit-sharing?  Could this be the beginning of the gum wrapper museum collection that is not accessible to the public?  Ah Mr. Wrigley, clearly you had a flavor for the dramatic!

← Gazing through Windows With Wonderment!
Throwback Thursday – The Queen Mary: What a marvelous maiden!! →

40 comments for “The Wrigley Building – In the name of chewing gum!”