Yesterday I posted a picture of the, “Iconic Chicago Theatre“.  Afterwards I kept thinking, “I need to go into that building!” And so, I did!

I took a one-hour tour that absolutely left me spellbound.  What a building!  I must tell you that I tried so hard to get some really good, clear pics. However, the lighting in the building (especially the theatre itself) is either extremely bright or extremely dark; not too much in-between.  This in and of itself left me a tad bit frustrated, especially because I had to keep up with the 20 or so people who were also on the tour.

Ah, for my UK friends; wouldn’t you know that everyone on the tour was American except for two lovely ladies from York, England and guess who they picked to chum around with during the tour? I laughed when I thought that I must still be giving off my Commonwealth vibe!

Normally the tour allows participants to stand on the stage and look up into the seatless crowd, and imagine what it would be like to perform back in ‘the day’.  That’s the spectacular characteristic about the Chicago Theatre; you would literally swear that 1921 had been placed right in front of you.

However, on this particular day, Trevor Noah (who hosts the popular American late-night show, “The Daily Show”) was taping at the theatre (all week in fact) where normally the show is recorded in New York City.  We weren’t allowed to go onto the stage because the crew for the show was setting up the miles of electric cables, etc.  The other place we weren’t able to see (again, due to the special show) was the backstage area with notably a large number of, ‘theatre treasures’ from performers of yesteryear.

The architectural style of this building is known as, “Neo-Baroque French-Revival”. With its ornate ‘everything’, this is normally not a style that I enjoy.  However, in this grand, majestic theatre, it fits perfectly! Can you see the murals at the ‘top’ of the ceiling? It would take hours and hours to truly examine everything in this building!

There are 3,600 seats in the theatre.  I will be posting a few of the good pics I was able to take.  Unfortunately, none of them contain the entire theatre in one shot.  I must go back sometime when I know I can ‘stand on the stage’ and get wider pictures.

Are you ready to see the massive window that adorns the front foyer of the building? (Forgive me for jumping around in the post, starting with the theatre and returning to the front)! It’s just that I was so excited for you to see the theatre first! 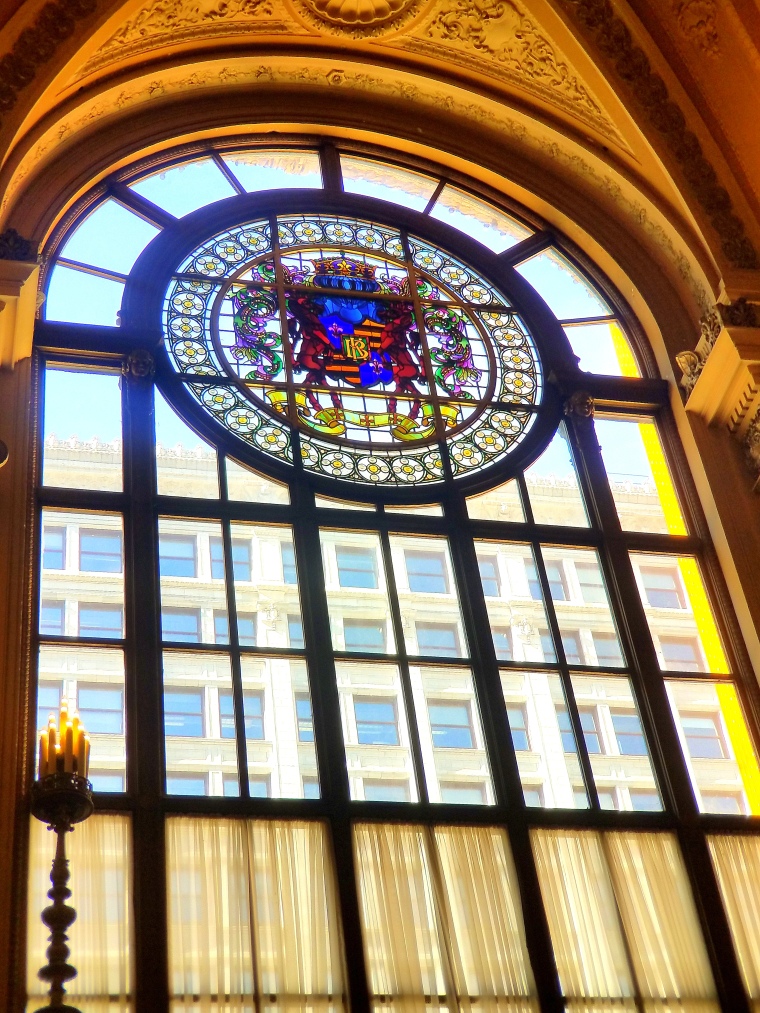 This is a massive arched window with Tiffany stained glass! I seem to recall the tour guide mentioning that this foyer (I think he actually referred to it as the, “Grand Lobby”) is approximately 5 stories tall.  If you look closely at the stained glass inlay, you will see two horses depicted with film ribbon in their mouths!

I do wish the tours were hours and hours long!  Hhhmmmmm, I think I need to get a job there! That way I can share many more pics with you!  I shall definitely be posting more pics to give you a bit more of a glimpse inside this magnificent place!

I wanted to tell you that I had you, my wonderful readers in mind the entire tour, and tried so hard to take decent pictures to share with you.  Now, about the job at The Chicago Theatre………………