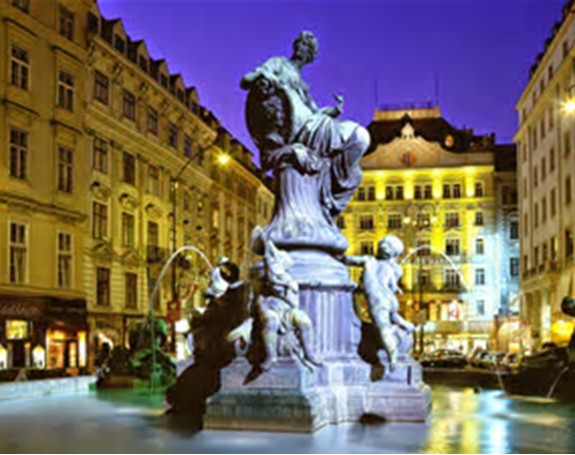 **This is a repost from a few years ago.  Since humor is in desperate need these days, I thought I’d share this post again (please have a laugh at my expense; in this case, a schilling or two!)

Letting my mind wander is sometimes a bad thing; however, when I am writing a post perhaps it can be a good thing.

For whatever reason unbeknownst to me, I started thinking about a couple of bizarre, yet in retrospect, quite amusing experiences I had eons ago.  People have told me on many occasions that I can ‘write like I talk’.  Well then, let me show you what they mean:

Years ago, I was visiting my brother who lived in Germany at the time.  He was stationed there with the military.  With both of us having a zest for traveling, we decided to take a cruise on the autobahn and meander our way to Austria.  I must have a selective memory, because you would think I might be ready to tell you all about the gorgeous scenery, the culture, the food, and the marvelous music heard all over Vienna.

Nope, I’m actually going to tell you that my clearest memory is about a bathroom.  I am pretty certain that most women can relate to this.  It doesn’t matter whether you are visiting the Taj Mahal or the local town fair.  You think, hey, that’s super-great and all, but where is the bathroom/restroom/toilet?  While visiting Salzburg Castle (which in and of itself is spectacular, or so I remember), I told my brother I needed to find a bathroom.

I recall not really thinking about any surprise factor; after all, a bathroom is a bathroom anywhere, right?  The first thing I noticed was this little dial thingy by the door handles to the stalls.  Wait a minute, you mean I have to PAY to pee?  Well I’ve never…………….

And truly, I had never had to pay, I mean.  This is something I realized was a European norm; however, you can keep your change in a pocket in Canada; pay potties haven’t floated over there yet.

As usual, I digress.  First of all, I had no idea what coins I had to use, but more importantly I was pretty darn sure I didn’t have anything that would work.  I started rattling around in my purse.  A safety pin (could I jig the door open with it?), some stale gum, a Canadian penny (wrong monarch or notable on the front).

While I continued to fumble around inside my bag, I heard someone behind me with a very deep and authoritative voice say something to me in German (my knee-jerk thought was, wow, that lady has quite the man’s voice, poor thing).  As I turned around, the next thing I know I am standing in front of a young guy, probably in his early 20’s.  Oh wait, it gets even better.  The fellow was standing next to man’s best friend; in this case, it came in a large, furry coat with ears as pointy as the Austrian alps. 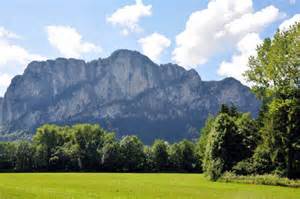 I wasn’t sure if the guy and his German Shepherd were going to rob me in that  bathroom, or if it was all just “Backwards Day” at the castle.  In English, I told him I didn’t speak German (by the time all of this occurred, he could have run off with my safety-pin, gum, and Canadian penny only to invent some on-the-fly robbing device MacGyver-style).

In broken English he asked me if I needed change for the toilet.  Whoah, this is just crazy.  And finally, ‘the penny dropped’ and I realized Mr. Austria and his loyal, furry companion were the bathroom attendants for the ladies’ washroom!  I was so desperate to ‘go’ that I handed him a paper bill I had neatly tucked away beside my passport.  Not understanding how much I was handing him (my brother was helping me figure out the money, bless him) I was going to either be paying the equivalent of $50 bucks Canadian to use the facilities, or he was an honest man-in-the-ladies-washroom attendant, and it may have been 25 cents or so.

Instead, he reached into a little case clipped onto the side of his belt, put a ‘coin’ into the door handle contraption, and opened the door for me.  I thanked him, walked inside, and shut the door so hard the frame felt as if it was going to bring an entire row of pay toilets down to the floor.

And then…………………………………nothing.   I couldn’t do what I had needed to do for the previous hour.  Stage fright overcame me in a little bathroom stall in the middle of Austria.  Knowing the guy, his dog, perhaps an Austrian accordion player, and God only knows who else was working the afternoon shift that day could be standing outside the block of stalls.  Too embarrassed to know what to do, I simply flushed the toilet so it sounded good, washed my hands, fixed my hair, and hoped to goodness that guy wasn’t going to stick out his hand waiting for a tip (or the dog stick out his paw hoping for a milk biscuit of sorts).  Hey, it wasn’t my country, and I most definitely was proving I did not have the playbook for being there. 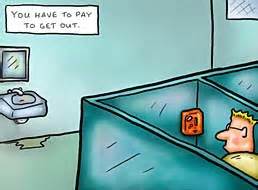