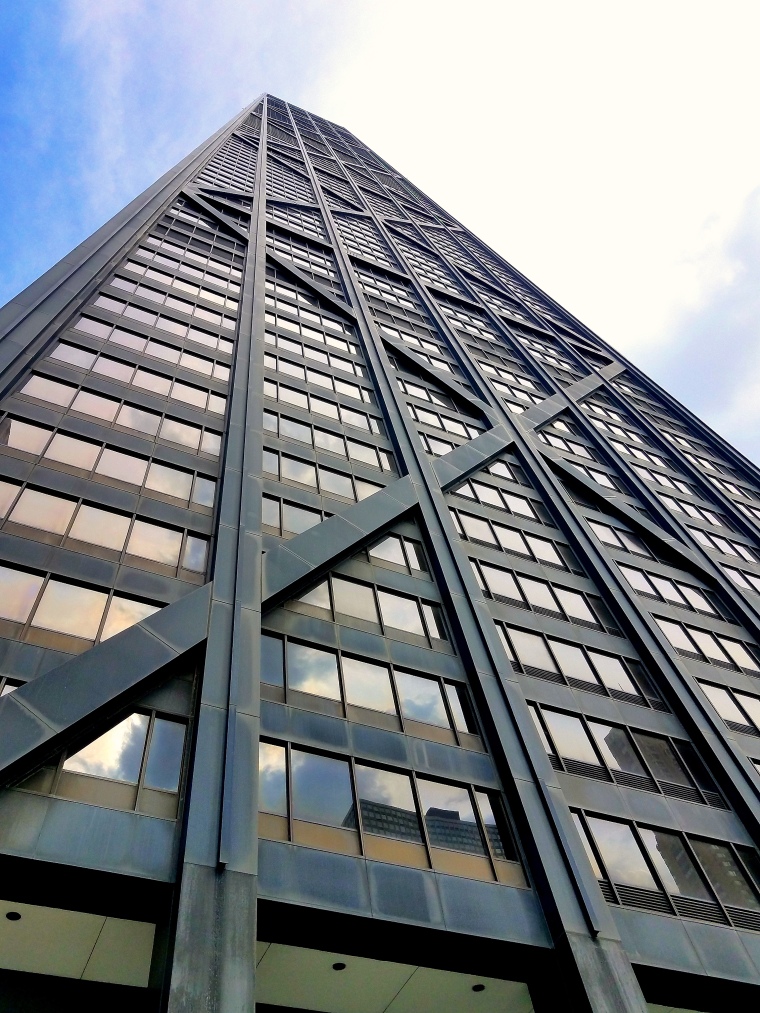 At this risk of becoming ridiculously dizzy, a few weeks ago I took this picture of the John Hancock Building.  At the angle I was standing, I couldn’t get the entire building into the picture (perhaps that was a good thing, lest I had to lay down in the middle of Michigan Avenue to get it)!

The John Hancock Building is one of the tallest buildings in the world.  At 100 floors, it rises 1,027 feet (344 meters), with an observation deck on the 94th floor.

This structure was built in 1969; notice the “X” patterns in the steel.  This style of architecture is known as, “structural expressionist”.  In a nutshell, this “x-bracing” actually allows a building of this magnitude to withstand extremely high winds and earthquakes.  Instead of having this pattern located on the inside of the building, the design brings it to the outside (also opening up the interior for a larger floor plan, as it isn’t mired by the bracing of the building).

Here is a little piece of trivia I heard that I’m not necessarily certain is just an urban legend. Apparently it is supposed to be a ‘status symbol’ if you happen to live in a unit whose windows are partially blocked by part of an ‘x’.  Hhhhmmmm, methinks this might just be a case of the “Emperor’s New Clothes.”  Do you remember that story as a child?  The Emperor is told his new clothes look fabulous; all of the townsfolk are convinced that his robes and outfit are lovely.  The only problem is, the Emperor wasn’t wearing any clothes at all!  Being told the ‘x’ blocking your view of Lake Michigan is wonderful just might fit this emperor bill, don’t you think?