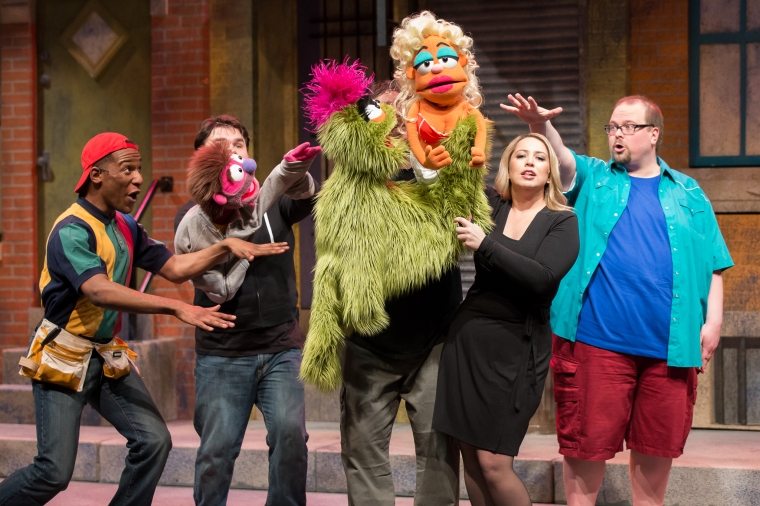 [all photos in this post courtesy of Mercury Theater Chicago, with huge thanks from The Chicago Files!]

It is not often that one gets to experience the wonder and excitement of a live puppet show that is not designed for the kiddo, teen, tween (whatever that is!), and everyone in between! That, my dear readers, changed for me about a week ago!

Winner of three Tony awards in 2003 which included, “Best Musical”, “Avenue Q” spent six years on Broadway before it meandered its way onto stages literally around the globe.  On April 23rd of this year, Mercury Theater Chicago opened its stage doors to people and puppets alike for its Chicago production of Avenue Q.  The enduring laughter was so profound that the show has extended its stay until October 26th.

As a child, did you have your wee nose pressed against the television whenever, “Sesame Street” adorned the screen?  I most certainly did, and for that reason, Avenue Q takes on an added layer of admiration, as if it wasn’t already a phenomenal production in and of itself.  Nonetheless, whether you were a Sesame Street spectator or not, Avenue Q captivates its audiences with a perpetuation of clever and gratifying charm second to none.

Avenue Q’s storyline is situated on the premise that, as a young adult, what do you do with your life?  Trials and tribulations of entering adulthood are superbly explored in this production.  The characters express their childhood beliefs, versus the reality of their, “grownup” lives.  Bills must be paid, rent is due, how do I get a job, what can I do?  The beliefs and attitudes they held as children, such as, “I can do anything”, “I am special”, come to a screeching halt once the actuality of adult life has kicked in.

As his college dorm is swapped for less than divine digs, “Princeton”,  our primary puppet pal, becomes newly acquainted with his soon-to-be best pals and neighbors.  Archetypal roles are seamlessly fulfilled as we are introduced to the principal puppets and people:

Ah, Trekkie Monster, a rather notable character with strikingly similar, um, “fur texture” to that of the, “Cookie Monster” of Sesame Street fame; however, Trekkie is addicted to Internet porn; Kate Monster, who is the cute, sweet, and rather insecure “monster”, I mean, “girl” who dreams of opening a school for monsters; there is Nicky, whose character is likened to that of,  “Ernie”, the not-so motivated half of the, “Bert and Ernie” duo from Sesame Street fame; wait, who could forget about, “Lucy”; she’s a good-time, get-around floozy, bless her!  Added to the puppet parade are a couple of, “Bad Idea Bears”; these “wolves” in “bear” clothing love to, “stir it up”, as it were, notably to already vulnerable and easily swayed souls.

Regarding the people portion of the program, there is Brian, a funny guy who wants to bring it to the stage; his Japanese fiancée, “Christmas Eve”, who, sadly, is a therapist desperate for a client (or two); Rod is a tie-sporting, serious Republican (and the roommate of, “Nicky”; there’s that, “Ernie and Bert” acknowledgment) who feels he has to hide the real Rod; Gary Coleman, (who plays a building superintendent) named after the actor in “real-life” who was a very successful child star, but lost his money reportedly to the underhanded ways of family members.

The interplay between puppet and people characters was superb; the puppets were treated as people, and the people who operated the puppets aligned their facial expressions with those of the puppets; or was it the other way round? In any case, whether the puppet was being masterfully expressed by hand or by rods, every move was flawlessly executed by its puppet partner.

And the music! Did I mention the music? Every single performer was stellar; I laughed to such tunes as, “It Sucks to Be Me”; What Do You Do With a B.A. in English?”; and my favorite, “There Is Life Outside Your Apartment”.  Although unseen, the musicians were certainly heard; how enjoyable to know there were musicians performing live for our puppet and people players!  Although I cannot be completely positive, there might have been a puppet (or two?) at the keyboard.  My only comment is, “Why not?”

The set was easily a snapshot of a, “not so posh” neighborhood in New York City.  There again, taking its “Q” *grin* from Sesame Street fame.

I utterly loved this entire show.  From the puppets to the set design, from the singing to the laughter in droves, I was thoroughly entertained the entire two hours of the performance (there was a 15-minute intermission; time to sample the chocolate for sale in the lobby; the Mercury Theater Chicago has thought of everything, if you ask me).

I’m not going into anymore detail about the ‘wrap-up’ at the end of the performance, because quite frankly I do not want to spoil it for you.  Who knows, you just might find yourself being serenaded by a moppet with green, gangly fur, and a fuchsia lid to “top” it off!

[photo above:  Princeton and Kate Monster]

Mercury Theater Chicago has some exciting performances set to hit the stage after Avenue Q has taken its collective bow:  The Christmas Schooner, The Adams Family, just to name a couple that yours truly will most definitely be attending!  Here is their website:

Were I in a position of voting on, “Best Performance by Puppets in a Musical”, Avenue Q would receive, “10/10”.  I cannot say enough about the synergy of this entire musical.  The boy band, “‘N Sync” has nothing on these folks; it doesn’t get any more ‘in-sync’.  Guess what? I could tell that each performer absolutely loves what they are doing.  I could feel it; their energy resonated throughout the entire theater.  Now THAT is what I call magic in motion!!